When we think of RC cars we immediately think of children playing with a toy, or maybe we think about hobby grade cars.

Truth is that RC cars are being used not just for recreational use, but also for military, law enforcement, space, and commercial use. This “toy” is actually versatile and is being used in many industries as a tool for specific tasks.

Military Use of RC Cars

As far as military use is concerned, RC cars are used by all the branches of the military. One of the most powerful countries that use these vehicles is Great Britain. It has been using remote-controlled vehicles in its Military since 1991, where they were used for mine clearance during war operations.

The U.S army also incorporates RC cars in its arsenal. They use these for a number of purposes such as surveillance and reconnaissance.

NASA also uses remote-controlled vehicles that are used to explore Mars. The Sojourner rover launched in the mid-nineties was one of them and it is considered a milestone in robotic exploration because it was the first remote-controlled robot to land on another planet.

Though it is remotely controlled, this is not your average RC car. It has a computer brain and remote control software, and it operates almost by itself. The operator just gives it directions, and that’s about it. It was able to travel up to 300 yards per day on the Mars surface!

Law Enforcement Use Of RC Car

The police department in Sacramento and Boston and the bomb squad in New York City use remote-controlled cars to defuse or detonate explosives.

The Sacramento police department uses an RC truck fitted with cameras to be the first that gets into potentially dangerous, or hazardous areas.

The RC truck operator has a VR goggles that give him a 360-degree view of the environment and he can even poke into buildings and other dangerous area, without risking the life of a police officer or fireman.

Businesses also use RC Cars for various marketing purposes. Toyota launched an advertising campaign that featured a hydrogen powered RC car for its new hydrogen cell vehicle. It is actually a scaled model of the Toyota Mirai and it used mainly for marketing purposes.

It is part of an experiment Toyota do with the Hydrogen fuel cell electric engine, and their main goal is to show that hydrogen fuel cells can be used in a conventional size car, as well as in a small scale RC car. Its mainly shows the versatility of the engine.

History of RC Cars And The Use of Them

As you could expect, as soon as RC cars become popular, people began to experiment and race them.

In the late 1970s, a winter national series was established. As a result, the event became increasingly popular as an increasing number of scratch built automobiles began to participate in it.

The first remote control car was considered a toy and it was produced in Italy by a company named El-Gi.

Their first RC car was a model car of the Ferrari 250LM, and it was shown at the Millan toy fair in 1968.

In the early 1970s, a number of small businesses in the United States started selling commercial items. Most of these firms began as slot car manufacturers and subsequently switched to RC products as the popularity of that category waned. Among them were Associated Electrics, Thorp, Dynamic, Taurus, Delta, and Scorpion.

The use of RC cars has definitely changed a lot. We have seen that these small, yet powerful vehicles are used across the world in different ways for various purposes.

As humanity moves forward and progress is made, and especially in a pre-COVID era, and social distancing, we can expect the use of remotely controlled vehicles to expand even more.

I guess that soon we will start seeing civilian use of RC cars, who knows, maybe we will see a Tesla Model RC? 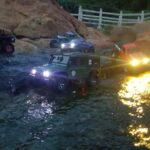 Toy-grade vs. hobby grade RC cars (All The Differences) Are all RC cars toys? | what about hobby-grade RC cars Are RC Cars Illegal? (11 Things You Have to Know)